You may have seen some new signs alongside the road in Kershaw County. 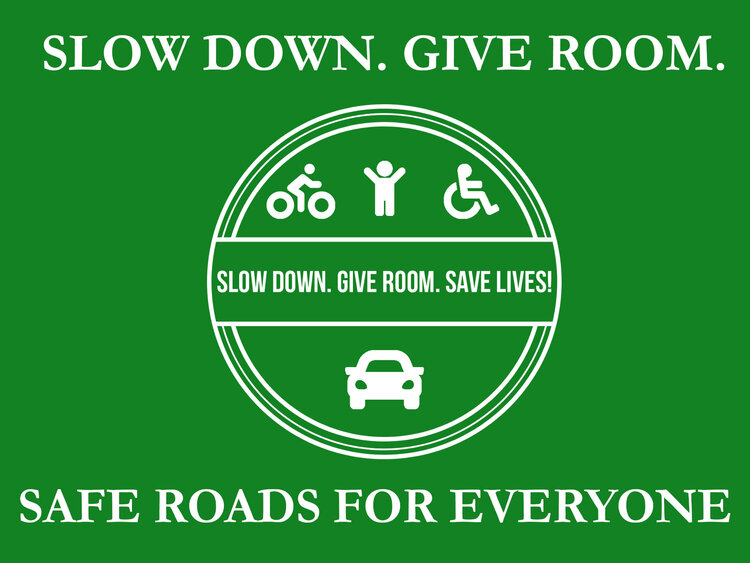 You’ll see these signs along Highway 1 in Camden, Lugoff and Elgin; near Goodale State Park and near Lake Wateree, at recycling centers, and dozens of other locations throughout the county.

They’re the brainchild of Fiona Martin, an avid cyclist, world-class triathlete and local advocate for safe roads. She developed the sign campaign to remind drivers of the responsibility we share for making roads safe for everyone ― cyclists, pedestrians and drivers alike.

Eat Smart, Move More Kershaw County provided a grant to print the signs, and KC Trials supported the project, too, with grant funds provided by the Health Services District of Kershaw County.

In February, volunteers placed the signs in locations selected by runners, walkers and cyclists. The signs are moved occasionally to cover more parts of the county.

Near the end of February, I went out for my Saturday morning run in east Camden. My route took me down Dicey Creek Road, where the speed limit is 35 but lots of drivers feel comfortable going much faster. I’m accustomed to retreating farther onto the shoulder when I’m running and a car approaches. But on this particular day, several cars passed me going fairly slow.

Just a few seconds later, this row of green signs came into view:

I hope you pay attention, too. As drivers, we hold the key to road safety. When you see someone walking, running, cycling, or just standing, on the side of the road, slow down. If safe, move over. If you pass them, give them plenty of room. Together, we can save lives and make safe roads for everyone.

Many thanks to Fiona for getting this sign campaign started, and for everyone who helped make it happen.